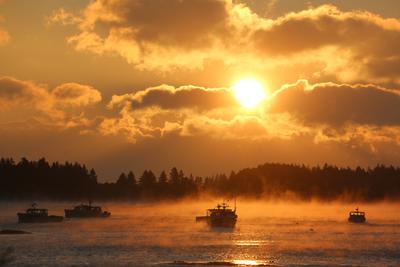 Sea smoke envelops the lobster fleet in Stonington Harbor on the cold, cold Tuesday of January 11. The phenomenon occurs when frigid air flows across warmer water.

The federal government has signaled its intention to nearly eliminate rope fishing for lobsters over 10 years, but the entire fishery may be closed even sooner than that, according to Pat Kelliher, Maine Department of Marine Resources commissioner.

The reason: to save the endangered right whale.

Fishermen say there aren’t any right whales in the Gulf of Maine. The government not only says that there are, but recently announced they’re dying off even faster than previously thought.

“We think the threat of the closure of the fishery is increasingly significant,” Kelliher said at a virtual Lobster Advisory Council Meeting on December 15.

First, lawsuits could result in a decision that would end lobster fishing in the Gulf of Maine.

Second, a de facto closure could result from a shortage of fishing supplies needed to comply with regulations that take effect in May, Kelliher said.

Third, the federal government may impose even harsher new rules sooner than previously expected, according to Meredith Mendelson, assistant DMR commissioner, during the meeting.

“The industry is in a tough spot,” Kelliher said. “I get calls weekly from fishermen saying, ‘What can I do? What can I do?’”

State Rep. Genevieve McDonald, a council member, points out that a single government agency, the National Marine Fisheries Service, has the power to shut down the entire lobster fishery.

“That has far-reaching implications not just to our fishermen, but to the land-based infrastructure that supports the fishing industry,” McDonald said in a phone interview. Along the coast, that includes banks, truck dealers, boat builders, gear suppliers, seafood dealers, restaurants, hotels and town governments.

NMFS is an agency of the National Oceanic and Atmospheric Administration, which has already ordered measures taken to protect whales since the Endangered Species Act became law in 1973. Fishermen say those regulations have cost them tens of thousands of dollars for new ground lines, sinking lines and gear markings.

In August, NOAA ordered a 967-square-mile swath of the Gulf of Maine closed to rope-fishing for lobster during prime fishing season, from October 1 to January 31. The closure affects more than 100 fishing vessels, Kelliher said. Fishermen say there are no whales in that zone, and the government has failed to prove that there are.

The Maine Lobstermen’s Association has filed a federal lawsuit arguing that NMFS’s 10-year plan to save right whales will eliminate the lobster fishery—and won’t save any whales.

The MLA’s case is one of a handful of lawsuits over the whale rules. It will be argued on a parallel track with a federal case brought by environmentalists, who want even stricter rules. That case, Mendelson, “represents the most significant threat to the fishery.”

Maine’s congressional delegation and Gov. Janet Mills agree with the fishermen. Mills announced at the end of last year that the court granted intervenor status to the state in the MLA lawsuit. Kelliher said the Mills administration has $230,000 to spend on lawyers and is looking for more money.

“We have an uphill battle,” Kelliher said.

The environmentalists’ case is buttressed by NOAA’s new assessment that there are fewer than 350 right whales in the world. The agency based the assessment on an updated model, Kelliher said.

“They’re stating something a year and a half ago and now they’re saying ‘80 whales less’ and we don’t see any dead whales,” Drouin said.

DMR’s director of external affairs, Megan Ware, said 2021 was not a great year for right whales. The lowered assessment means still tougher new rules may be coming down the pike faster than expected, she said.

“The next round of rulemaking was supposed to be 2025,” she said. “We’re probably going to be on a different schedule.”

In May, lobster fishermen have to make more costly changes to their gear under the latest rule. They will have to put weak points in their ropes, change the markings they’ve already made and put 20 traps on one trawl.

But they can’t find the gear.

Council Vice-Chair Jeff Putnam said he recently went to the marine supply store. “They were out of 3/8 and 5/16 [rope],” he said. “I needed some endline, and it just wasn’t available. Buoys are hard to find.”

Kelliher said the supply problem is getting bigger. He didn’t know if NOAA would delay the requirement because of supply shortages. If NOAA were to keep the current deadline, it would amount to a de facto closure, he said.