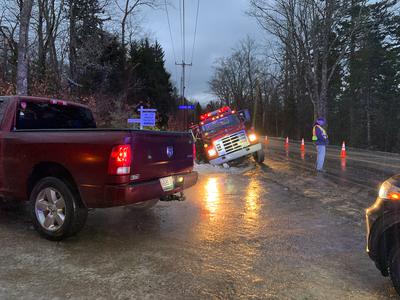 In the midst of responding to a car and truck off the road near Acadian Oak Lane at Caterpillar Hill in Sedgwick on January 19, a Sedgwick fire truck found itself in a similar situation around 3 p.m. Caterpillar Hill was a sheet of ice, according to photographer Kristin Eberdt. The road was closed until after 7 p.m. since it took that long to get a wrecker to pull the fire truck out. The driver of the car was taken to the hospital by ambulance; the occupants of the truck suffered no injuries.

by Jeffrey B. Roth

A Blue Hill resident was injured when she lost control of her car as rain turned quickly to ice on Wednesday, January 19. Another vehicle, as well as a Sedgwick fire truck responding to the accident, slid off Caterpillar Hill Road as a result of conditions around 3:30 p.m., according to police and fire reports.

An incident report filed by Hancock County Sheriff’s Deputy Jeff McFarland, states that at about 3:25 p.m., “Heather Oliver, 36, of Blue Hill, was driving a 2019 Nissan Altima north on Caterpillar Hill Road in Sedgwick when she lost control of the vehicle due to slippery, ice-covered road conditions. The Nissan slid across the southbound lane, went off the left side of the road and struck a tree. Heather was transported by ambulance to Blue Hill Hospital where she was treated for chest, shoulder and neck pain. The Nissan had reportable damage to the front and had to be towed from the scene by Snow’s Garage.”

As a result of the accident, Oliver’s sister, Erin Walker, started a GoFundMe page to raise money to help pay expenses while Oliver recovers from the accident.

“Heather escaped serious injury, but she did fracture her spine, which has left her in a brace and unable to work her job as a bartender/waiter for the next 4-6 weeks,” Walker posted on GoFundMe and confirmed in a January 25 email to The Packet. “Her car, unfortunately, is totaled.”

Oliver is a single mother of a 7-year-old girl. In addition to her job, she also attends school full-time, the post notes.

In a follow-up press release, Deputy Dylan Hall reported that he responded to a 3:23 p.m. report of another single vehicle accident, also on Caterpillar Hill Road. Upon arriving at the scene, he “observed a 1999 F-250 crashed into the ditch. I spoke to the operator of the truck, Daniel Insua-Ramones,44, of Florida,” the report states. “Daniel advised that he had been traveling northbound down a slight hill and realized the tar was completely ice-covered. He attempted to slow down, however he started to slide off the road and lost control of the truck. The truck then came to rest in the ditch and had some damage to the undercarriage. The truck was towed due to leaking essential fluids. Daniel and his three passengers…Jason Proper, 40, of New York; Lance Davies, 21, of North Carolina; and Martin Benjamin, 21, of Georgia, were not injured. The vehicle was towed by Snow’s Towing.”

Fire engine opts for the ditch

Sedgwick Fire Chief David Carter described the scene to the select board during its Thursday, January 20, meeting. Carter said that a member of the fire company advised the fire department that “you could skate on the road anywhere…he actually got on the scene first…and there was already one accident.”

“Our Engine 31 responded, and he was going maybe 15 miles-per-hour and couldn’t stop, and he decided the ditch was the place to go,” Carter said. “So he put the truck into the ditch, which was the right thing to do because there were people and vehicles all over the road there.”

Deputy McFarland and Chief Carter decided to close the road to traffic due to the icy conditions. It remained closed for almost four hours, from approximately 3:30 to 7 p.m., during the Blue Hill-to-Deer Isle commute time. Carter said that most of the traffic was detoured through Old County Road to North Sedgwick Ridge Road and back onto Route 15. Some traffic used Herrick Road to Reach Road, he added.

“I’ve never seen anything as icy as that,” Carter said. “When I got down to the scene, the first thing I saw was there were two guys—I think one of them may have been the operator of the pickup—trying to walk down the road. People had no idea how slippery it was.”

Dave’s Towing was called to get the fire truck out of the ditch, Carter said. The towing company brought its large wrecker for the job.

“There was a little damage to [the fire truck],” Carter said. “The tailpipe was ripped off. Luckily, the ditch was really soft…I decided that it needed to go to Colwell’s for inspection.”

Carter said that since the damage to the fire truck appeared to be less than $1,000, Deputy McFarland advised him that if the damage to the truck exceeds $1,000, he would prepare an official report on the incident, as required by state law.

An Acadian Oak Lane resident, Kristin Eberdt, was driving home on Caterpillar Road when she happened upon the accidents. “Apparently when the rain hit the pavement it froze,” Eberdt, who provided the newspaper with photos from the scene, said. “Caterpillar Hill was solid ice.”

Carter said that everything went well at the scene. He noted that the Maine Department of Transportation was alerted and responded quickly to deal with the icy road conditions.